The graded image is shown on the left while the original image is displayed the right.

How did you start out in post? Was it luck or a ready mapped out plan?

It was pure luck. The university degree I was doing had a work experience relationship with a number of post houses in Soho, London, so I made the most of it and took the chance to get some work experience. After three weeks, they offered me a job and that was it, I had a position lined up for when I finished my degree as a runner, but that didn't bother me.

Having been a runner for three months and then a tape op for eight months, I was asked if I was interested in joining the telecine department. This was at the now defunct SVC Television. I thought it looked like a lot of fun so I accepted. We weren't called colourists in those days, though, we were 'telecine operators'!

The thing I love about colour is that it's immediate, and has such a great and instant bearing on how people perceive images. I love seeing how people react to their pictures being manipulated in a way they might not have thought of – or, indeed, thought possible – outside of a VFX suite.

What sort of projects do you work on?

At the moment it's commercials, but it has been everything; features, trailers, TV drama, documentaries, long form music shows and a few thousand music videos. The bulk has been music and ads.

No, seriously, a good day at the desk is when everybody, including me, leaves the room happy. But the best is when the images have been perfectly exposed and you know you have something that will stand out.

I did have a lot of fun grading Andy Morahan's Guns 'n Roses 'Estranged' music video. I had a week to grade it. This was when we used to grade all the rushes. They were shooting all over the States and in the Bahamas and they just kept shipping me more and more negatives. They ended up shooting 50,000 feet of 35mm! The DoP called me up once that week and asked me, 'How do the dolphins look?' He hadn't shot the dolphins, they'd got an underwater guy in to do that. Anyway, we ended up changing only one shot, Axl Rose wanted the grass, which could be seen from the helicopter, to be orange! Memorable and decadent.

Technology has an enormous effect on the way I approach a job. I've only been a Baselight user for six months and already I'm acutely aware of how differently I'm working. I like the way it makes me think differently. Keeps my brain from seizing up!

I've been very lucky to have been operating for so long. When I started all I had were three joysticks and an 'enter' button. It was pretty basic stuff, grading print, never negative. Then grading systems gradually became more and more sophisticated. It was always at the point when things could have become a bit boring when there'd be a big leap in the technology, so there would be something new to learn and a whole lot more that you could do to the pictures. I guess it's been a very gradual process of liberation.

A bit of both really. Quite often people will come in with a very fixed idea of how they want their job to look, and that's fair enough - they are paying after all. But it's great when the reins are relaxed a little and we just let rip and see where we end up.

I think if people shoot in one way and expect you to be able to fight everything about the way it's been lit/art directed, you're on a hiding to nothing, a compromise at best. Otherwise, most things are possible to achieve, within reason.

Do you find the new generation of "raw" cameras give you more control?

Every medium has its limitations, including film. A high-end digital camera will deliver mind-blowing results when shooting at night, for example, but for texture and 'look', you can't beat film.

As far as I'm concerned compression is the enemy. And now, more than ever before, there is a camera to suit almost every application and every budget.

More often than not it will be nothing more than a quick phone call with the DoP. They usually know what's possible but every now and again they'll call and run things by you, in case there's something they may not have thought of. As for shoot attendance, traditionally that's been the domain of 2 and 3D people.

Do you see any new projects originated on film today? If so, why do directors choose it, and what can you bring from it to create a distinctive look?

There are still people shooting on film. Some directors will even pay the difference (if it's more expensive) in order to get the look you can only achieve using film. People choose it because it's still the benchmark. The way film looks is still the way an awful lot of people are used to, or prefer, seeing their images. But it has died off faster than I think anyone imagined it would.

Are you seeing archive restoration work? Re-mastering old movies or preserving assets for the future? What are the challenges in working with archive celluloid?

I haven't personally been involved in film restoration, but have seen quite a bit of the process when I worked at Technicolor in Los Angeles. They have an incredible team of people in their restoration department. I think one of the major challenges facing them, apart from the obvious missing frames and perf damage, is film grain, or film grain 'management'. In the last 10-15 years, film stocks have come a long way in terms of latitude and grain structure, and when old grain and new grain collide!

After a long day slaving over a hot Blackboard I like nothing more than a walk home in the (now) dark and making loud music with my son! 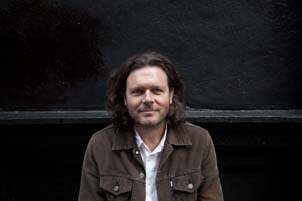 “I've only been a Baselight user for six months and already I'm acutely aware of how differently I'm working. I like the way it makes me think differently. ”