Ayman joined twofour54 in Abu Dhabi as a colourist in 2009, after seven years working in post-production as an editor and demo artist. He is now an accomplished colourist working on high-end cinematic movies, TV programmes, music videos and commercials in his grading system of choice – Baselight.

I began working in post production in 2001 and very much came to the world of colour grading from the editing side. When I first started as an editor I had to use video effects software such as Discreet’s Combustion and Smoke, which gave me the insight into the compositing and colour grading tools. By 2008 I supported a reseller in Dubai as a demo artist on Assimilate’s Scratch grading system across the MENA region. Thereafter I joined twofour54 as a colourist.

In 2009 the management at twofour54 asked me to evaluate the colour grading solutions available on the market at that time and to select a state-of-the-art solution that I felt met our clients’ creative needs.  From the trials we conducted it became clear that the Baselight system from FilmLight had the most to offer so we selected Baselight as the colour management solution of choice for the company.

We do almost everything at twofour54!  We work on a range of different genres including music videos and commercials as well as TV programmes, episodics and documentaries.  I will soon be starting on a much-anticipated big blockbuster Egyptian feature film – where we manage every part of the colour grading spectrum.

As I said, I am about to start grading a big Egyptian feature film which was written and directed by Ahmed Abdel Basset and starring the well-known Egyptian actor Khaled El Nabawi as well as Tim Hasan and Ezzat Abu-ouf.  The film is called Khutta Badilla – which literally translated means an alternative plan or ‘Plan B’ as it has become known in the wider press. The movie is due for release in December 2014.

For ‘Plan B’, I attended the filming on location, and worked closely with the DoP Samih Seleem and the director to decide the mood of the film.  Although I believe colour is subjective, I do also believe it is a collaborative function, and working with the director and the DoP was critical to achieve the look we wanted for the film.

The film was shot on a 2k Alexa camera.  I graded a teaser for it, which the team liked, so in essence that helped further to set the mood of the film.

My advice is to just sit and watch as many different types of programmes, music videos, films, etc as you can to get a feel for what colour is all about.  Then try to teach yourself some basic rules about colour and the looks you like. Try using Photoshop - apply different colours to get an idea of colour ranges available and how that would work in the grading suite so that when you do eventually get to sit in front of a high-end colour grading system, it will all mean something and be easier to understand and appreciate.

Tell us about your DI suite and Baselight set-up. How does it integrate into your editorial workflow?

At twofour54 we have a Baselight TWO system. Apart from giving us great colour control, it allows us to output files in all the different formats that we need, including ProRes and DNxHD. It means we can work with Baselight sitting on the Avid ISIS and Isilon for Final Cut Pro servers, while editors can send projects back and forth. We can render in real time, so everyone gets to see what the final result will look like.

I love the new feature for the built-in colour space conversion. It means we can grade in the same camera’s colour space then Baselight take care of different colour spaces conversions to accurately simulate what the output will look like in theatres, on television, mobiles and so on.

The best thing about the Baselight system is its ease of use.  Both the Baselight and the Blackboard control surface are complementary to the way I work, and I like that as it allows me to be more creative.

The tools in Baselight make it very easy to use.  Baselight enables me to start grading while the edit is still in progress so I don’t have to wait until I have a locked down final. Any changes made in the edit can be imported/exported as XML files and Baselight will automatically recognise those adjustments and update any of the scenes or shots that have changed. It automatically correlates to the grade I have already applied – I don’t have to redo everything.  This helps to speed up the process, and provides huge efficiencies in the whole workflow.

I have used Baselight Editions for a TV commercial recently and it worked seamlessly on this project.  It offered a lot of tools that are not available in FCP 7 like mattes, shapes and keys.

Directors want to achieve rich, detailed looks, which are critical to creating the mood. So we need to apply lots of layers and shapes in the grade. Baselight makes this really easy, so we can quickly realise the director’s vision.

For me it is about spending time with my family and friends as well as sleep!  When I was younger I used to run long distance, and in fact was the Egyptian champion for the under-17s, but I don’t get much time to do that any more, which is a shame.

I have a lot of favourites but I would say the movie I like the most is Les Miserables.

I just love cyan, particularly the darker cyan shades as it reminds me of being outside looking at the sky and the ocean, which I love. 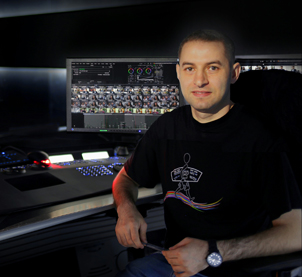 “Directors want to achieve rich, detailed looks, which are critical to creating the mood. Baselight makes this easy, so we can realise the director’s vision.”