I have an old girlfriend to blame for that. Her father was a producer at a production company in Soho. I needed to earn some extra cash to take his daughter to France and he suggested that I get a few weeks work as a runner to pay for it. After a lot of door knocking, I managed to land a month’s work at a production company in Soho, where one of my duties was to courier things to and from the various post houses in the area. Towards the end of the month, after accidentally ordering the wrong coffee beans for the office (a crime so heinous as to seal my fate on the spot), I was politely informed that my services were no longer required. Never mind, I’d earned enough to take us on holiday, so off we went to France where my girlfriend fell in love with a Frenchman and dumped me. Can’t say it was the best month I’d ever had, but still, I’d seen what I wanted to do in those various post houses a month or so earlier… All those buttons and lights and technology… I was hooked.

I’d landed a job at Rushes in Soho, where I’d been promoted from runner to the giddy heights of librarian. I’d become interested in telecine and was good friends with a hotshot young colourist there, Adam Scott. Unfortunately I was second in line for the job as his assistant and was officially the world's worst librarian, so I quit and decided to head off to the Caribbean to find myself a job as an underwater cameraman (slightly ambitious, as I couldn’t dive at the time and had never used a camera before). Not to be deterred, off I went and despite having to sleep rough and never actually managing to land any form of employment, I had an absolute blast. One day I got a message via my mum saying that Adam’s assistant had been given the flick and if I fancied it and felt like leaving the delights of the Caribbean behind, the job was mine. By then I’d completely run out of money, so I put my underwater cameraman career on hold and headed back to Soho.

Apart from the time that I accidentally stuck my finger into a high voltage circuit in the back of Rank Cintel, the buzz that I get from colour is being able to take a raw image and manipulate it to create something striking and interesting. Often it doesn’t feel like a job, a lot of the time it’s just fun.

What sort of jobs do you work on?

Working with intelligent people on an interesting project that allows me some creative expression.

That’s impossible to answer. There have been many projects over the years that I’m really proud of, including various landmark music videos and commercials.

It plays an enormous and constantly evolving part, whose development seems to be accelerating faster and faster.

I don’t think that the two are mutually exclusive. I love playing with and investigating new technology to see what it can be used for, but ultimately I’ll use whatever tools or techniques are available (be they old or new) to create the look I’m after.

I think the challenge has always been to push the boundaries in search of something new and interesting. In that way, nothing much has changed over the years, except that now we’ve got a lot more tools at our disposal with which to push those boundaries.

Do you find the new generation of "raw" cameras give you more control?

I’ve tried a bit of on-set grading, but in reality, everyone is so busy on a commercials shoot that they don’t have the time or the correct environment in which to give the grade the attention that it needs. I do occasionally work with cinematographers prior to shoots though and I’m currently in the process of developing some tools for them to use on set.

Do you see any new projects originated on film today? If so, why do directors choose it, and what can you bring from it to create a distinctive look?

I haven’t graded a film job for over a year, although I was talking to one of my directors this week about this very subject. He shoots all over the world and was saying that the last few jobs he’s shot in the US have been on film and on the insistence of the agency! I still think that outdoors in a bright environment, 35mm film is hard to beat (unless you’re shooting 70mm of course). But in low light, film struggles against the better of the current spectrum of data cameras. However, with the current grading tools available, it’s easy enough to make good data cameras look like film.

Having been a Resolve colourist, why did you choose Baselight for your new facility? What were the driving factors in that decision?

Well it wasn’t cost, that’s for sure!

You’re right. I’ve used Resolve for many years and in fact bought a couple of them back when they cost lots of money. I was happy with the Resolve, right up to the point that I started using Baselight. It’s not that Resolve is a bad system, it’s just that when you use Baselight you realise how much more flexible, subtler and sophisticated it is.

I first tried Baselight properly whilst working in New York (many thanks to Fergus and the rest of the grading department at The Mill NY for their patience and help), and although I had to completely re-think my approach to grading it soon became evident to me that it was a fantastic system… So many ways to achieve so many looks and the way the Blackboard is integrated is just brilliant. There simply isn’t any comparison to any other control surface on any other system that I’ve used, be it third party or other.

In any profession, you want to be using the best tools available. So when it came to setting up my own facility, there was really only one choice for me… It had to be Baselight. We all get judged on the work we produce and it was clear to me that I’d be limiting myself and compromising if I used anything else.

After spending numerous hours of the day in a darkened room, what do you enjoy doing most outside work and why?

I guess it’s no surprise to find that I like doing things that are the complete opposite of sitting in a darkened room. I love being outdoors, running, playing squash, riding my motorbike, flying my helicopter, sailing and hanging out with my family. I don’t watch a lot of telly. 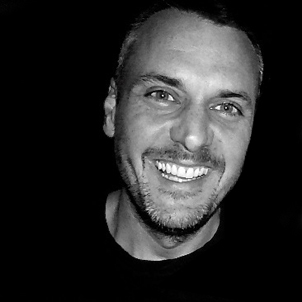 “In any profession, you want to be using the best tools available. So when it came to setting up my own facility, there was really only one choice… It had to be Baselight."