Dan Coles, Senior Colourist at Technicolor London, has a rich experience in grading both feature and TV productions.  He loves the creativity and challenge of grading and creating a ‘look’, and makes up for all that time in a darkened room with lots of outdoor activity.

Dan has won two RTS Craft & Design Awards, the latest for his grading work on The Eichmann Show in 2015, and prior to this for his work on Battle for Haditha in 2008. His credits for Technicolor include Victoria, The Collection, The Level, Him, Flowers, VEEP, Grantchester, Endeavour, Capital and The Eichmann Show.

How did you start out in post and become a colourist? Was it something you always wanted to do?

Like many people in post I began as a runner and originally wanted to be an offline editor. I started out at SVC, which specialised in commercials, promos and short form – I remember carrying several huge 35mm film cans into the telecine suite for a Spice Girls promo grade, and hanging around to watch some of the session. So 1997 was when I first became interested, though it was not until I moved to Telecine that I actually trained as a colourist. One of my first jobs there was assisting in the DVD mastering of Fear & Loathing in Las Vegas with Terry Gilliam – at that point I was confident I’d found the right job. It was after Telecine that I became one of the founding members of Pepper, and that was where I started to undertake my own jobs both in long and short form grading. I spent nine years at Pepper, and have now been a senior colourist at Technicolor for nine years, helping to establish them as one of the top UK drama post houses.

You’ve worked on a mixture of feature and TV productions. How do they differ and which do you prefer?

I love a variety of work – feature and TV yes, but also a variety of genres within those fields. The features I’ve been involved in (both studio and independents) have traditionally been more ambitious, and allowed more grading time than the TV productions. In recent times though it is harder to draw a line between feature and TV, as many of today’s TV productions are incredibly ambitious and bold.

I love working here and feel lucky to be surrounded by so many talented people – both from the post community, and the freelance production community – it is very inspiring!  I still enjoy the buzz and excitement of coming into Soho every day, probably partly because I no longer live in London. Spending so much of my week in a dark room I like to get outdoors and active at weekends – for that reason if I was to choose to work in a different city it’d have to be somewhere with a great outdoors – Vancouver would tick that box!

Tell us what projects you have been working on recently and what’s next?

Recently I’ve been working on Hatton Garden for ITV, Trauma also for ITV, and Detectorists Series 3 for BBC4. Next I have Series 2 of Flowers (for Channel 4) and Delicious Series 2 for Sky. I also have a new Netflix/BBC series for 2018 and an Amazon/ITV series. It goes without saying I’d love to do some more Black Mirror too if possible.

Talking of Black Mirror, how many episodes did you grade?

Jut the one episode – “USS Callister”.

As each episode required a totally different look and feel, did you get a tight brief on these looks or were you able to have some part in creating them?

Both really – we talked about lots of different looks and “USS Callister” employed several different grading styles and looks for the distinctly different setups within the film. I listened to ideas from the DOP and the Director and also went away and came up with some ideas of my own, which I would then present to them. We also had to test these looks in both SDR and HDR to make sure they worked across both formats.

What was the collaboration like between you and the cinematographer, director and DoP?

It was an incredibly collaborative experience for me and I feel we really pushed some boundaries with the time and effort we put in. My favourite projects are invariably the ones where everyone feels able to pitch in and become involved in the grading process.

How did Baselight support your work on this series?

My Baselight TWO (Generation VI) system performed fantastically - not only as the grading system but as an editorial system too. We had raw 4K files in the timeline that were cached and the performance was fantastic to the point where we sometimes forgot we were working in 4K at HDR.

Following the theme of the series, do you think there is a dark side to technology?

I think when you watch “USS Callister” in 4K HDR you will see there is also a bright side to the technology ;-)

How long have you been using Baselight?

Endeavour Series 1 was my first job on Baselight, back in 2013.

Speed and flexibility with regard to look creation, and continuity. Being able to refer to multiple timelines is a huge advantage. Everyone loves watching the shape tracker in action too!

You won your second RTS Craft & Design Award for your work on The Eichmann Show in 2015. What was special about this project?

After carefully and sensitively matching the contrast levels between the different sources, the images flowed together seamlessly allowing us to feel a part of the trial itself, which, along with so many other aspects of the work in this powerful film, added to the sense of realism.

Do you have an all time favourite project that you’ve graded / worked on?

The Killer Inside Me – an independent feature directed by Michael Winterbottom. This was one of my favourite projects. The brief was 1950’s American film noir. Beautifully shot by Marcel Zyskind on 35mm - we had a brilliant time grading it. We referenced old print looks and played with magenta and crimson tones throughout.

One of my favourite TV pieces was Cilla where we referenced and created a period look and feel to great success, which was inspired by photographer John Bulmer’s project “The North”.

If you could start over, would you pursue a career as a colourist once again?

Yes, I probably would – it allows me to work on some fantastic projects with some extremely talented and inspiring people.

Is there a movie or TV show grade that you particularly admire or something that inspires you?

I absolutely loved the look of Fargo Season 2. Currently Stranger Things Season 2 and Mindhunter look stunning with their respective 80’s vibes. I really enjoyed Ozark too.

Having the capability of achieving a far greater tonal range in the colour palette, and having a greater degree of range and therefore control in highlight details represents an exciting challenge for colourists. Creatively we can bring more to the table, but it is also a game changer in that different eyes in the room are now more likely to see those wider gamut colours in different ways, so you really have to be at the top of your game.

Working with 4K files in HDR has taught me that the human eye very quickly adapts to this new aesthetic, and in my experience doesn’t take long to start to really enjoy the HDR image. Emerging technology trends such as 8K are somewhat inevitable but that has always been the way. My golden rule is stick to the three “C’s” – Collaboration, Creativity and Continuity.

So when you do get outdoors, what is your sport of choice?

I’ve done a few triathlons but next year I’ll be doing my first half iron man, so lots of time will be spent swimming, cycling and running. I’ve always loved snowboarding but nowadays that is an annual treat! However I’ve recently completed a course to sail a dinghy and have joined my local sailing club too – I’d love to do more and get good at that. 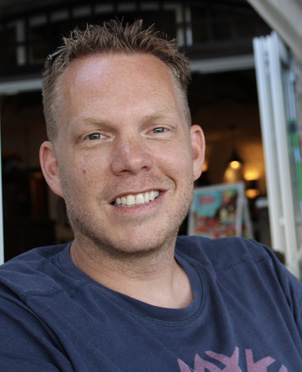 “USS Callister was an incredibly collaborative experience for me and I feel we really pushed some boundaries with the time and effort we put in.”