Enge Gray is a film and TV colourist with a love for family and rugby.

He joined London-based Platform Post in 2014, the same year that he was awarded the RTS Craft and Design Award for Picture Enhancement for his work on BBC2’s series Welcome to Rio.

Tell us a little about Platform Post and how you differentiate yourselves in the marketplace?

Platform Post is a privately owned boutique post facility in the heart of Soho. Over the last fifteen years we have been fortunate to have extremely loyal returning clients, primarily working for a few broadcast clients with whom we’ve had career-long relationships. More recently we’ve started to expand our offering to a wider range of genres, including peak-time comedy and factual entertainment, and a more diverse range of broadcasters on all platforms. Our craft and production teams are highly experienced and awarded, working across longform and shortform work. Baselight is a powerful part of our offering: enabling us to raise the level of finish for all clients.

How do you usually collaborate with the VFX and editing teams at Platform Post?

I work very closely with our VFX and finishing team at Platform. Workflows follow a tried and tested pipeline with slight tweaks depending on job requirements. One recent project for Mitsubishi had Baselight and Flame working in tandem, passing files back and forth seamlessly with updates. I am very much looking forward to seeing how Flame will fit even more snugly into our Baselight workflow with the launch of Baselight 5.0.

I started in the industry as a runner at Carlton TV in 1997, and worked through the ranks to get to online editor. It was in these big old linear suites where I first started ’tinkering’ with colour. We had rudimentary tools to manipulate colour, but with time and effort I could achieve some interesting looks for the promos I was finishing.

I got my first stills camera when I was seven and, having done photography at school, I always loved exposing and manipulating the image in a darkroom, something I would later find out I loved doing to the moving image too…

My first real grading job was whilst at ITV as online editor and colourist using Final Touch, which later became Apple Color.

When did you first come across Baselight?

I remember seeing an early Baselight system on trial in one of the suites by the scene dock. I was immediately smitten. I think it was the control surface that had me hooked, still does!

When it comes to grading for television, what are the main principles?

As a colourist I think your fundamental principle is to help the DoP or director realise their vision for the viewing audience, albeit whilst adding your own mark of creativity of course.

Television can be a slightly different animal, particularly for the documentary or factual entertainment formats, as you will often find yourself correcting technical issues alongside the creative part of the job.

This is becoming more prevalent with more and more acquisition formats being used and mixed in the same film.

How do you use Baselight on a daily basis?

Every day is different.

I like it that way as the breadth of work keeps it fresh and allows me to explore different techniques depending on what I may be working on.

The changing pace of the work is also very fluid: I may get 10 hours to grade 1500 shots for a documentary one day and the next may well be 6 hours for a 30 second commercial or promo.

My clients are now familiar with Baselight, if they were not before, so fundamentally it feels like a safe option (with a good colourist at the controls too, of course!)

They also like the speed and no fuss way with which I can get that look they like or iron out any creases that may have cropped up.

Could you describe recent grading projects and what Baselight tools were particularly beneficial?

One recent project was a three part series for Tracey Ullman called Tracey Breaks The News. Each week Tracey took a look at topical stories in her own inimitable way. Thing is, all the finishing post was to be completed on the day of transmission. I would start at 06:00 and then pass off to online and audio for an afternoon delivery, which went to air at 21:30.

The speed and accuracy with which I can work on Baselight made it possible for the clients to get a full grade. Having my toolset and Blackboard layout set up also adds to this speed.

What are the biggest challenges you face today as a colourist?

I touched on it earlier, but one thing I am finding is that the sheer number of acquisition formats being used, often in the same film, can be very challenging.

Coupled with budgets being squeezed, this can sometimes find you trying to fit two days work into one, and that’s always a challenge.

In 2014, you picked up the RTS Craft & Design Award for Picture Enhancement for your work on BBC2’s series Welcome to Rio. What was special about this project?

Well, it was the first time I got to work with director Edward Watts, for one. Rio was in the news at that time with the FIFA World Cup and Olympics being hosted there. All the stories and footage about Rio in the press were pretty depressing, so, with Ed’s film being a celebration of the people of the Favelas, I thought it would be nice to add a real splash of colour throughout the series, accentuating the colours already present, but also adding blue, orange and coral pink skies where needed.

It worked a treat and was great fun.

The natural world is an astounding place if you take time to get out and look, really look at it.  This time of year is just the best as those autumnal colours are everywhere.

I also love music videos: so many boundaries have been pushed in this genre, and it keeps getting better.

Rugby: I am a qualified coach and referee and most Sundays you can find me doing one or other for my son’s club team. I’m also finding introducing my daughter to vinyl records very relaxing on Sunday afternoons.

I’m just finishing The Apprentice then moving onto a short film and a couple of new series before Christmas. In the New Year I am looking forward to getting stuck into another landmark film, but I’m afraid that is all I can say about that for now. 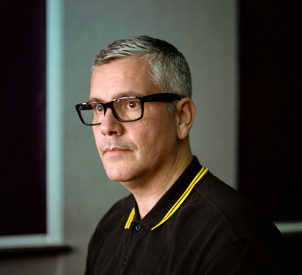 “I got my first stills camera when I was seven. I always loved exposing and manipulating the image in a darkroom, something I would later find out I loved doing to the moving image too.”