Eric Whipp was born in Auckland, New Zealand, and brought up in Australia. He started work as a colourist in the mid 1990s. Specialising in movies, he worked on the 2007 Academy Award winning Happy Feet. Today he is co-founder and senior colourist at Alter Ego in Toronto, Canada’s leading colour and VFX facility.

When not in his Baselight suite he is out making pictures. His still photography has won him commendation in the International Photography Awards, and his 2001 documentary feature Rainforest: Beneath the Canopy won him a gold Australian Cinematography Society award.

Most recently he has been re-united with George Miller, director of the animated Happy Feet movies, for a very different project – Mad Max: Fury Road.

How did you meet George Miller?

I first met George on Happy Feet back in 2005. I had never graded an animated film before, and was pleasantly surprised that we treated it as if it was a live action film. We just jumped in and started grading it.

I then worked with George again on Happy Feet 2, and at that point we started talking about Mad Max.

What was the workflow?

Fury Road had a very unusual post-production pipeline in terms of colour. We had the luxury of a very long post period which was great for look development and for the ability to re-visit grades.

I started setting looks on early cuts of the film in February 2014, with George in Sydney. I then essentially took the film back with me to Alter Ego in Toronto where I worked on it over the next year.

We would do interactive grading sessions with George over our StudioLink system. This worked amazingly well and enabled George to sit in a theatre in Sydney and interactively grade with me at Alter Ego in Toronto.

There were three Baselight systems set up at Kennedy Miller Mitchell, the production studio in Sydney. We have five Baselight systems at Alter Ego, so we set up a remote server where the project files could be stored and accessed in either city.

It meant that I could call on our team of colourists at Alter Ego to help rotoscope and track shots that were going to be complicated. I would then work on a scene and simply save it, and it could be opened in Sydney for review.

As the look developed, we realised that it was crucial to view VFX shots under the grade. George wanted a very stylised and pushed look for the film, which would often show up issues in VFX shots.

I tried to keep a current grade on the whole film even as cuts and shots were changing so that this process would work. The new Baselight for NUKE plugin is actually the perfect bridge between VFX and finishing, and it is definitely something we would implement for any future films like this.

How did you, director George Miller and cinematographer John Seale work together?

Fury Road was a colourist’s dream. I was given a strong brief from George Miller and the most amazing images from John Seale, and then a year to just play and grade the way I thought would work best for the film. Then we would re-group and tweak from there.

What was the look for the film? How much was done in camera and how much in Baselight?

The original Mad Max was one of the first post-apocalyptic films to be made. For thirty years George has watched dozens of films in the same genre and noticed that they all seemed to use the same de-saturated, bleached look. He was adamant that Fury Road should have a saturated, sharp and graphic novel quality to the image.

The challenge became how to get that rich graphic look out of essentially two colours: sandy beige and blue sky. All the art direction and costume design specifically put everyone in very neutral tones, removing saturated colours from the palette. It was difficult to push the image to appear vibrant without it looking ‘cheap’, and often we found that the key was to have a rich sky to contrast against the warmth of the sand and the characters.

Luckily, Cinematographer John Seale shot an amazing digital neg on the Arri Alexa with so much range.

What were the key challenges in creating the look?

Apart from the challenges in creating a hyper-colourful, rich and graphic look, John knew that lighting continuity wasn’t perfect. The shoot was over six months - and ran at a frantic pace - so the grading process was used to iron out some of the daylight differences between shots to help cut between a sunny day and a cloudy day, for example.

George is also a strong believer that an audience should focus on character’s eyes. We spent a lot of time ensuring that the attention in any given shot guided you towards the eyes or whatever the important action might be in the frame.

Tell us more about the day for night scenes.

The film features about half an hour of ‘day for night’, where the scenes were shot 2-3 stops overexposed in full sunlight. We dropped the exposure of the shot overall, gave it our stylised blue night look, but then dug anything we wanted out of the shadows without excessive noise and grain.

After that, we had to replace almost every sky. It required a lot of detailed roto work around characters and focal points, but the end result is a really interesting graphic night look.

You’ve worked on an incredible number of sky replacements…

I’m not sure of the total count, but we must have done hundreds of sky replacements in Baselight. To get the rich look, we often found that some kind of blue sky helped make the image more graphic, particularly when a cloudy shot is cut next to a sunny, blue sky shot.

Using the tracking in Baselight, I was able to add skies to so many shots with relative ease. The main reason for doing these in the grade instead of VFX is that the sky could be changed at any time and adjusted with the grade as the look was developed. This development began very early on in the post-production process.

How did you find compositing in Baselight?

The compositing features on Baselight worked really well for sky replacements. I was able to key a sky, roto and garbage mask if needed, track the new sky to the shot and then grade and position the sky exactly where we wanted it.

There were some shots where there was almost nothing to track, just flat sand desert and a white sky, but the area tracker often surprised me with how it managed to lock to the movement of the shot.

How did you collaborate with VFX?

The main VFX studio was Method in Australia, with another great team of artists under VFX supervisor Andrew Jackson at Kennedy Miller Mitchell.

With Baselight systems also at the production studio in Sydney, we found that the combination of VFX and colour worked really well together. Often we would come across a troublesome shot that we couldn’t get over the line, and working with George interactively in colour on the shot would solve the issue so we could move forward.

We ensured that we got mattes for all VFX shots, so that I could adjust the elements in the grade. This was hugely beneficial, as once the strong, contrasty grade was applied, it would often crush away detail in the VFX. Using the mattes, I could control the elements and keep information without having to manually roto.

Was there a specific scene you found particularly enjoyable or challenging?

All of Fury Road was enjoyable to work on. The day for night was probably the most challenging, but in the end I think we have a unique look. I think almost every eyeball has been roto’d and tracked in the film too!

What were the deliverables?

The movie was delivered in 2D digital, 3D, IMAX and even good ol' 35mm print.

The 3D was a post-conversion done by Stereo D. The work is quite amazing: not a cardboard cut-out conversion, but a very real-looking 3D. This of course meant that once we were finished with the 2D grade, we had our DI team rather painstakingly go back and offset every shape and keyframe on every layer for the 3D version.

What sets Baselight ahead of its competition?

The colour for Fury Road is not a basic balance. The stacks are huge and we went into great detail on many shots. It might be adding a tiny light ping to someone’s eyeball, or working with layers of mattes from VFX, all the way up to replacing and tracking in a new sky.

The Baselight grading system is probably the only system that could do what we wanted at the fast pace we needed. 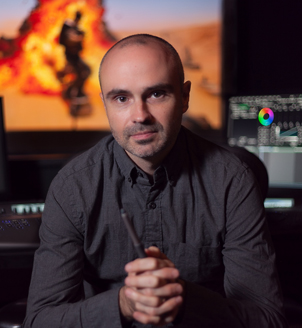 “Fury Road was a colourist’s dream.

I was given a strong brief and the most amazing images, and then a year to just play and grade the way I thought would work best for the film.”