I studied film editing in Korea, at Dongguk University. After my sophomore year I worked as a field editor for two years, then before graduating I made the decision to get a job in the film industry. At that time, my goal was very simple: “No matter what, I’ll work as much as I can before I’m 40.”

As you know, everyone wants to be a director but directors probably only work on two or three films a year, which is not enough for me. It’s the same for DoPs but editors can be involved in five to eight films in the same time.

At the Busan Film Festival in 2006, I met the company HFR (Hollywood Film Recorder) who had just started offering DI services in Korea. I found out they had completed the DI on 40 films from the summer of 2005 to the autumn of 2006, so I started there as an assistant colourist and DCP mastering technician.

Before I started a new career in China in 2009, I had worked on almost 40 Korean films as an assistant colourist or colourist using a variety of systems including Baselight FOUR.

How did you start out as a colourist in China?

Well, I remember it was 2006. CJ E&M Korea wanted to do the DI for a Korean and Chinese co-production film, ‘Sophie’s Revenge’. I was the only one who could speak English so the company asked me to do some DI producer work.

I worked on more projects as a DI producer and after a few business trips to China, I thought it would soon become the next big and interesting market. In 2007, I persuaded my CEO to start a DI business in China. At that time a foreign company couldn’t work in the film business, so I found a Chinese partner for a year and then started HFR Beijing in February 2009.

Why has Baselight become the system of choice in China?

There is a lot of choice, but I think Baselight is the best grading system available. Also, Truelight is an extremely precise colour management system and it complements Baselight, even after the death of film in China. Every client is pleased with the results and with the secure, stable and real-time performance of Baselight.

What does Baselight give you that other systems cannot, and did you evaluate any competitive products before choosing Baselight?

I think colour management is the most important thing in this industry. Every camera has its own raw file structure and changes are rapid and frequent. China is the fastest growing film market in the world and the DoPs here want to use every upcoming technology right now.

Baselight is updated all the time to make sure it can handle new formats and, including Truelight, has the most exact colour management available. FilmLight offered the most precise colour management and grading system in the film era, and now it is the most responsive and innovative company in the digital era, with regular feature updates that keep it on top. I never worry because even if new technology comes out, I am free to deal with it in Baselight.

What projects have you been working on lately?

Lately, I’m more focused on art house and genre films. As a colourist these kind of films are interesting to grade for their unique style, so are more interesting to do. I’ve worked with recent films from the Chinese Sixth Generation such as Zhang Yuan’s ‘Beijing Flickers’, Wang Xiaoshuai’s ‘Chongqing Blues’, Lou Ye’s ‘Tui Na’ and rising young director Li Yu’s ‘Buddha Mountain’ and ‘Double Xposure’.

How does Baselight fit into your workflow?

I think Baselight is the most stable and user-friendly system in the professional market. Some VFX-heavy films have over 3000 cuts and a lot of different file formats and alpha channels, but Baselight can handle it all in a single timeline and can also adjust every raw format’s metadata separately.

From version 4.4, I can composite different images and grade with colour mix mode; sometimes I use mix mode like RED’s HDRx.  This allows me to manipulate highlights and shadows in a single clip – without such functions dark shots and burn out shots cannot be fixed in the grade. I also like inside/outside grading, in-and-out blur, looks and quick shapes – they all help me to create different looks. The powerful background cache also increases performance: when I grade music videos or commercials, I can work with raw images even on a Baselight ONE system.

Probably every Baselight user, like me, appreciates one of the most useful features: unlimited auto save. When I was an editor, I saved the project every 20 minutes. But I’ve almost forgotten the shortcut for save after using Baselight!

What cameras are used for origination in your market? Are you seeing digital cinematography cameras like Red, Alexa and Canon?

The ARRI Alexa is the most popular camera in China, followed by RED. Sony F series cameras are not that popular here yet. Canon and the others are just starting to join this market. Productions use 5D, GoPro and Phantom as sub-cameras and for special circumstances, and recently commercial productions use the C300 a lot.

I haven’t seen a production use film since the end of 2012.

Is there interest in using FilmLight's end-to-end colour management, creating viewable images and looks on set and carrying that info on into the grading room?

Ideally, end-to-end colour management is the efficient and creative workflow for colour grading. But the DIT market has just started in China, and most films don’t have time and budget for on-set grading (even basic LUT adjustments for raw cameras).

That’s why Image Forestt Studios has just started a China-style DIT service. I’m using codecs and the Yoyo system for data management, and if the client wants to do some basic grading then I provide them with Baselight Editions for Avid or Final Cut Pro. I think this is the economic and realistic way for DIT in China.

Before production starts I generate project LUTs. If the DoP or director grades shots on set, then my DIT will provide me with BLG (Baselight grade) files for those shots. Baselight Editions can grade editorial movie files and therefore it helps me to close the gap between on-set and post-production.

How would you summarise your relationship with FilmLight as a company?

I have used FilmLight products from 2006 including Baselight ONE, Baselight TWO, Baselight FOUR and Baselight EIGHT, plus the Northlight and Northlight 2 film scanners and the Truelight system.

In 2006 we had a lot of options, but we finally made the decision to purchase FilmLight products for our company. The main reason I wanted FilmLight is because they share their roadmap with me so I know when I will be able to deal with a new feature or new hardware.

I’m also very satisfied with their technical support. They can tunnel into our systems online and if we have a hardware issue, they support me 24/7 from London and LA.

FilmLight’s products have exactly the right essential and user-friendly functions – they do not over-complicate. And during DI I come up with a lot of ideas for Baselight - they always listen and integrate my ideas in the next generation.

What features/capabilities of new Baselight versions do you want to have particularly and why?

File management and DCP functions are the features I need the most.

I heard that FilmLight is already preparing a new file management system called FLUX Manage. I tested it at NAB in 2013 and it looks perfect for my company. I’m not sure if FilmLight is preparing DCP creation functions for Baselight, but if they have one it’ll be great.

Also I would love to have the function to create multi-language subtitles, as every film has to have Chinese subtitles in China. 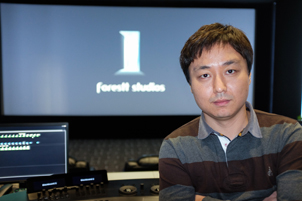 “During DI I come up with a lot of ideas for Baselight - FilmLight always listens and integrates my ideas in the next generation."