Kevin is one of the most respected drama colourists in the UK. His credits include Sherlock, Atlantis, The Guilty, Lewis, Soulmate, Merlin and Poirot to name just a few. His work has been honoured with various awards including two RTS Television gongs for Picture Enhancement for Sherlock (2010), which he was commended for significantly enhancing the mood and emotion of the drama and the subtlety and sensitivity of the approach.

A bit of both really. My father was a photographer and so I spent a lot of time in the dark room processing my own black and white photos. As I got more creative with my stills I started using the dodging and burning tools to play with the tones of the picture: very similar to what I do today. That gave me the interest in visual storytelling, and started me down the path to where I am today.

Mainly drama, but also some DI and documentaries. I love having variety in my work and wouldn’t want to concentrate on one area. My last well-known music video was “The Drugs Don’t Work” by The Verve, which shows my age!

On episodes one and two of Sherlock (season three) the DoP, Steve Lawes, wasn’t available for the grade. However, I had a good idea what he wanted from visiting him on the shoot and doing some test grades with him before the production moved into gear. Once the grade was finished he came in and watched it through, saying it was exactly what he envisaged. Setting the look early on paid dividends when we were pressed for time later on in the schedule.

The looks are getting more complicated and yet the time I have to grade a drama is getting shorter. Then you have the problem of trying to get the DoP, director and producer in the suite at the same time and on the same monitor to review your work.

I think as long as a show is graded to compliment how the DoP lit it, then you shouldn’t run into any problems.

What have been the challenges in grading the Sherlock series over the years and how has the look changed?

The big challenge should have been when we moved on from tape to tapeless for series two, but Baselight handled the transition perfectly. It allowed us to grade multiple native formats such as Phantom 2k and Alexa 444 within the same timeline, without any major issues.

The look doesn't actually change that much from series to series. For example, Sherlock's flat is a unifying factor, always looking the same. Apart from that I can be as stylised and creative as the story allows - depending on what the DoP and director wants. They always want to bring as much of their own style as they can into each episode. It's my job to put their ideas up on the screen - with a little of my own personal flair, of course!

How has your role as a colourist changed in the past 16 years?

It has changed and keeps changing every day. You have to stay up to date and on top of the new tricks and tools.

The biggest change for me has been the move away from film at the grading stage. I do miss handling a roll of cut neg and lining up the telecine, but then again I don’t miss the fumes from the wet gate!

Happy clients who trust what I do and material that has been shot well, which makes my job of producing quality pictures easier. The two tend to inform each other, as well.

Tell us about your Baselight set-up. What specific BL system are you using and how does it fit into your workflow?

We have five Baselight suites that are all comfortable and relaxing places to work. I work on Baselight TWO 4.4 with the Dolby PRM monitor, which means the client can still have a good view of the grade from the sofa at the back of the room. All our Baselight systems are used for conforming, grading and finishing.

Tracking is made so easy with Baselight and it has to be one of my favourite things about the system. The fact you can track and add shapes within seconds and all in real time still amazes me. Then you have the endless amount of layers available to you, really allowing you to be as creative as you want.

I also like multi-paste, which gives Baselight the upper hand amongst its rivals. When you get to the end of the grade and find there are a lot of repeated shots that need handles and you can just apply all the related grades with a few button pushes, it makes you thankful you're on this system - especially with budgets and deadlines tightening every year.

Working with the raw files is a great starting point. Straight away you have the confidence of knowing what is at your disposal. You're starting with clean hands and no bias to send you off in the wrong direction. To me, it's a bit like working with film. You'd put up your roll of neg on the telecine, and know that there was a huge range of options open to you when it came to the look of a show.

With the gap closing between production and post, do you find yourself getting more involved at the start of a project (production phase)?

The nitty-gritty of workflow is largely done by our data guys, but I try to get up to speed with a project before a frame is shot.  It's important to meet the DoP and director to sort any questions that may have arisen in pre-production. If time allows I like to do camera tests which benefits production, make-up, costume and so on. As I said earlier, getting a look set and agreed on by everyone (vital!) can really pay off a few months down the line.

Quite often it’s dark outside when I leave, so there is nothing better than going to a cinema to watch a film!

Otherwise I try to spend as much time with my family as I can. Meet friends and enjoy dining at a good restaurant every now and again. And of course, there's my expensive hobby: watching Arsenal play at the Emirates.

True Detective and Breaking Bad - quality shows that are redefining what can be done in TV. 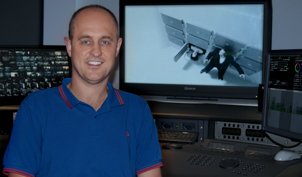 “The fact you can track and add shapes in Baselight within seconds – and all in real time – still amazes me.”