Gilles Granier and Fabien Napoli are the two in-house colourists at Le Labo in Paris. Together, they have worked on a wide variety of projects and boast a long list of credits, including The Wolf’s Call, the recent Netflix film Madame Claude, the Cannes Grand Prix 2019 winner Atlantics, and the three latest movies from Quentin Dupieux.

Learn more about their respective work, their approach to grading and their collaboration…

Le Labo is a motion picture and film company based out of 5 rue d'Hauteville in Paris. We specialise in processing dailies, mastering, including conforming, and colour grading.

You both have an impressive portfolio of films under your belt. Was there a particular project in each of your careers that got you to where you are today?

I would say it's the cinematographers we work with who get us where we are.

In my case, it was a few American DOPs when I started out, and also the Polish DOPs Janusz Kaminski with The Diving Bell and the Butterfly, and Peter Sushistzky with The Stone Council. At that time, they worked upstream to involve me in their work, even though I was just a young dailies colourist. These experiences allowed me to reassure French cinematographers about my ability to grade their dailies despite my limited experience. It launched me as a colourist.

There was also Frederick Wiseman and his cinematographer, John Davy. Collaborating with them was a matter of luck at first, but I have now worked on eight features with them. We’ve built a great relationship and it's a great honour.

I can't think of one project in particular. I used to grade tonnes of dailies, and that was a great way to get in touch with many cinematographers. Also, I had the chance to work on some foreign movies shot in France while I was doing telecine. Overall I believe that it's more the number of projects over the years that helps you to move forward.

Could you describe your relationship as co-workers?

We already knew each other from other facilities. When Gilles joined Le Labo Paris, he quickly suggested that I join them. I knew the team, the project at the time was motivating, and I didn't really hesitate... Gilles taught me a lot at the beginning, especially about the use of Baselight, and I am very grateful to him!

Arnaud Caréo, our technical director, also contributes significantly. He is very involved and listens to us, especially concerning colour spaces and the creation of new tools – plugins such as the shaders – that he codes and integrates in addition to those in Baselight.

Fabien is someone who likes things to be simple and, whenever possible, fun. It makes him a very nice collaborator.

We have no trouble discussing our working methods – we regularly realise that we use the Baselight tools very differently. I think we walk away every time with two to three tips and tricks each.

What brought you into colour grading?

Mostly photography, and consequently photo editing software. Later when I was studying cinematography, I chose an internship in post-production almost randomly. Because I was amazed by the power of the DI, I decided to write my university thesis about the relationship between the DoP and the digital colourist.

After my studies were over I got a lucky start working in a “traditional laboratory” (the late LTC in Saint-Cloud), and I did some colour timing for a few months.

Most recently Gilles you’ve been working on the French blockbuster How I became a super hero. Can you tell us about the grade?

It was my first time working with cinematographer Nicolas Loir. We worked in ACES, because it is a colour space pipeline that we know well – it allows all artistic possibilities as well as guaranteeing display coherence for everyone. A “post-LUT” world, as Arnaud would say.

Nicolas came up with a look he wanted for the movie and I created it. His perspective on the grade is very accurate, which makes him an ideal grading partner. The grading was very fluid, as the working basis provided by Nicolas for the shooting, and Inès Sanchez for the grading of the dailies, was already solid.

We worked a lot on the colour. It's a cold film but very colourful, we pushed the saturation quite a bit. And by working without LUTs it also allowed us to make the most of the different copies of the film in SDR, HDR Dolby and Dolby Cinema, starting with the raw files for each element.

And Fabien, you’ve recently worked with Quentin Dupieux for the third time on the film Mandibles. What is your collaboration like and how did you first get involved?

The first film together was Keep an Eye Out (Au Poste). It was Quentin's first film in France after spending a few years in the US. One of the founders of Le Labo Paris is a friend of his, so he felt comfortable doing the grade here. I simply got introduced to him while we did some pre-shooting tests and we got along quite quickly. We didn't go into fancy LUTs or whatever. It had to be precise and technical but without overthinking the grading process.

Deerskin (Le Daim) was a totally different shooting set-up, so we spent a little more time in the grading process but keeping the same philosophy.

How was the look developed on Mandibles?

We had to work on a promotional still before the actual grading. We wanted to feel the summer in the South of France where it was shot and embrace the artistic direction. His actual words were “sunny” and “pink”. It was very useful, as it became the reference picture during the whole grading process.

As you can see in his movies, it's not about chasing strong black levels, so it was all about pushing to the high key with soft contrast while keeping nice skin tones. Notice that it also has a lot to do with the particular lenses he uses – those you can't generally force the contrast with, and you get that almost “out of time” feeling.

Right now, we're currently grading our fourth film together: the movie's awesome but I can't tell you much more for now.

How has the Covid pandemic affected your work?

I graded a lot more contrast because of the fog on my glasses...

More seriously, it has not yet affected my work or really the cinema, apart from the closing of theatres of course. I'm afraid the worst is yet to come. To begin with, when theatres reopen, films will suffer from congestion, some may miss their audiences. I think the real crisis comes when the projects have to be distributed. The chronology of delivery will be reviewed, and we can no longer ignore the new players that are the streaming platforms.

How will we see the works tomorrow? Which ones and in which places, in what order? I think the pandemic is going to be a catalyst for change but you’d have to be very clever to predict what will happen.

We weren't able to do anything for two months during the first lockdown. Getting back to work was a relief, but we had a lot of movies waiting to be completed. We had to work one film straight after another, both in the grade and in the processing of rushes, when all the shooting resumed suddenly shortly after... but we’re lucky to have enough to work on.

Now with the delayed and rescheduled shootings, things are more imbalanced than before: it's hard to see precisely what could happen in the next few months.

Overall, what are your favourite creative tools in Baselight and why?

The Base Grade is so powerful and a perfect partner for the Curves... Playing between the different gains of the Texture Equaliser is incredibly useful... Colour Matrix and Crosstalk are great...

What’s great about Baselight is that you can take the correct colour path for each frame of a movie. We do not treat two images from different sources in the same way. I also enjoy the tools that allow me to create the “positive” of the film (considering the raw as the negative). The Curves, the Colour Matrix and... Arnaud's plugins!

Once I've created all of this, I grade using printer lights inside a CDL layer, back to basics.

What are your thoughts on the grading industry in France?

A lot of facilities stopped having in-house colourists in the past five years. At Le Labo Paris, which is only six years old, we made the decision to have mainly full-time talents. I think it’s a great choice.

Thanks to Baselight and Arnaud, Fabien and I have set up a high-quality pipeline that ultimately allows us to no longer have to talk about technical matters in the grading room. The word is artistic. For me, technique is no longer the main subject – the subject is the aesthetic rendering.

Where do you find creative inspiration?

Apart from films obviously, today I would say video games can surprisingly be really interesting as they look more and more like real movies. Recently I was amazed by The Last Of Us Part 2.

I also can spend a lot of time online watching tattoo artists: the way they build contrasts is always surprising.

When I think of the way musicians are working on a sound, on an instrument, I immediately find myself extremely sensitive to the image. It pushes me to try things, to twist the image, to seek, to generate accidents so I can offer more to DPs.

When computers are able to consider all the elements of a rotated image as three-dimensional objects, it is bound to change the way we make moving images. I don't know how long it will take, but it will happen. First the automatic masks from deep-learning, then the 3D objects.

My job is constantly evolving and I find that very exciting. I hope someday I'll be working on holograms, that it will happen before throwing in the towel.

I've particularly enjoyed grading Samuel Benchetrit's last film called Cette musique ne joue pour personne, shot by Pierre Aïm. Working with them was a great time, in a friendly and creative way. Great story and great cinematography, it's really one of my favourites... but when will people be able to see it? Soon, I hope. 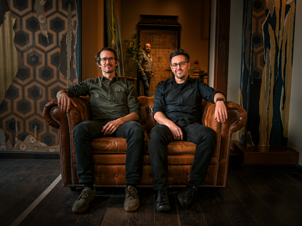 “We have no trouble discussing our working methods – we regularly realise that we use the Baselight tools very differently. We walk away every time with two to three tips and tricks each.”