Park Jin-Ho is senior colourist at Cinemate in Korea and recently worked on the first Korean film ever to win a BAFTA award for best foreign language film, The Handmaiden.

Inspired by Sarah Waters’s 2002 novel, Fingersmith, The Handmaiden is a poisonous and feminist tale from director Chan-Wook Park. Having transposed to the 1930s colonial Korea and Japan, Park presents a gripping and sensual tale of a young Japanese lady living on a secluded estate, and a Korean woman who is hired to serve as her new handmaiden, but who is secretly involved in a con-man's plot to defraud her of her large inheritance.

Behind the mood and the stunning colour of this movie is colourist Park Jin-Ho. After working on almost 200 films in the space of 14 years, Park experiments with colours like a painter who constantly pushes the boundaries of colour grading giving voice to his art.

Being a graphic artist initially, what brought you into colour?

I discovered colour in 2004 when the first Baselight system was installed at Sebang Film Lab in Korea. I had just started with the company and was working to build up an internal VFX team in the lab. I got myself up to speed on Baselight in my spare time.

I was using a very early version - Baselight 1.0 – and grading images scanned from film. Now all the footage is imported from digital cameras, but it’s still just as impressive to work on the grading desk.

Could you tell us a bit more about your first experience with colour grading?

I learned the colour grading language through Baselight, right from the beginning. It felt wonderful to sit and work on a grading panel in a DI room that was exactly the same as a theatre. I touched the Blackboard trackballs and I could change each RGB colour to what I wanted. It was very similar, to me, to digital palettes for moving images. The panel is so tactile, whenever I see the trackballs I want to move them, even in my dreams.

In the space of 14 years, you have worked on almost 200 movies. That’s a pretty impressive record. Do you still feel you have things to learn or master?

To me, personally, counting projects is pointless and I am thankful for the trust placed in hiring me every time. I always try to start with a fresh mindset. I have a desire to do my best in my role as colourist, not forgetting that I am just one member of a movie project, among many other ones.

Recently you’ve worked on the luxurious imagery of The Handmaiden. The movie is the first Korean film ever to win a BAFTA award for best foreign language film. What brought you to this project?

I have worked on several movie projects with director Park Chan-wook since my time as a junior colourist. The very first time I worked on his Oldboy DVD I was with a more senior colourist.

Park Chan-wook’s partner, DOP Chung Chung-hoon, has also worked with me continuously. This meant that when The Handmaiden project started, I was able to join in discussions at the pre-production stage. This gave me the time to test and adjust the camera and lens characteristics that had been chosen by the DOP in advance.

What was the collaboration like between you and the cinematographer Chung-hoon Chung?

Chung Chung-hoon used the Alexa camera and vintage lenses to try to create the feeling of Joseon during the Japanese occupation of the 1930s.

In recent years, most movies use very similar digital cameras and lenses. In the case of The Handmaiden, the Alexa was combined with the Hawk 74 Anamorphic to create a differentiated look in terms of texture and aspect ratio. I felt that it was the closest expression to the film texture among the projects I have worked on recently.

In terms of aesthetics, where did you find most of your inspiration for The Handmaiden?

I tried to tread a line that did not harm the texture already created by the combination of camera and lens. But I made the overall tone dark and cold to represent the historical background suppression of the Japanese colonial period, and the pitiful human relationships of deception and exploitation.

Did you approach the more intimate scenes the same way, in terms of colour?

To keep the under saturation of the overall movie, yes, I graded these scenes in a similar way.

How long did it take you to grade the film? And what part of the grading process did you spend most of your time on?

The colour grading work was completed in two weeks, but it took about four weeks to wait until cuts of the CG work were applied and could then be graded again. The longest time was the wait for the red brick to change to gray in the Seoul asylum.

What was the biggest challenge in achieving the final look on this movie? Were there any Baselight tools that particularly helped you to overcome the challenges?

The challenge was to express the wet and humid weather after the rain. It was difficult to recreate the sense of a wet and muggy scene on the screen. I found it really useful to mix several grades in one stack. It meant I could catch a thought and grade immediately before the idea disappeared, then blend it into the overall grade.

Do you have a favourite Baselight tool, or one that you turn to again and again?

Within Baselight, I think it is advantageous to mix the main UI, the timeline and the layers in colour grading work. It is easier to grasp at a glance, easier for communicating and cooperating with the DOP.

And of course, Baselight ‘undo’ is one of the powerful features and means that anything can be restored at any time.

Can you describe how you used the grading tools to get the look you wanted?

I lowered the overall saturation and desaturated the reds and blues further using Dkey. I use Dkey a lot, independently or alongside MatteMerge or other tools. It’s one of my favourite Baselight tools.

How has your role as a colourist changed in the past decade?

In the early days, tone matching played an important role in the field. Now the emphasis seems to be more on providing tone matching with more incidental creative colour.

In addition, the Korean production system is still significantly lower than the Hollywood system’s capital strength, making it impossible to shoot with perfect settings on location. So it seems that there are lots of cuts that depend on CG or DI for at least part of the image. In the past, if the emphasis was on getting the look right at the scene, it seems that the frequency of fixing the colours during post production is increasing.

What projects are you working on at the moment?

I recently completed Taxi Driver, Steel Rain and will be releasing or grading more than ten movie projects including,  What a Man Wants, KongJak, Changkwoul, Knight of Shadows: Walker Between Halfworlds (Jackie Chan). I am also ready to work for Netflix originals and Korean dramas. 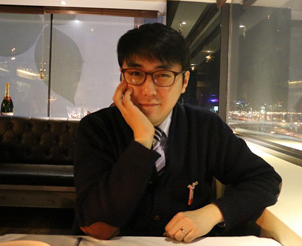 “I touched the Blackboard trackballs and I could change each RGB colour to what I wanted. It was very similar, to me, to digital palettes for moving images. The panel is so tactile, whenever I see the trackballs I want to move them, even in my dreams.”