Haig
Together in the Club VO5
The Peasant

Paul Harrison has been one of London’s leading colourists for almost two decades. In 2010 he joined Finish, a post house specialising in high-end colour grading and visual effects for commercials, films and television.

In the mid ‘90s I was working on shoots in a technical role. Then a friend of mine suggested that post would be a good thing for me to get involved in.

I went into Red Post Production in London (sadly no longer with us), had a good look around and really liked what I saw. I did a bit of research into how post worked and what was involved, then I found out about telecine.

I chose telecine because I like photography and colour. Out of the whole post process I found that the most interesting. I liked the challenges of it, both technically and creatively.

I located all the companies in London that had telecine and targeted them with my CV, and that’s how I ended up at The Mill. I trained there and started off as a runner, doing short films and music videos. I was totally focused on getting into telecine – probably too focused!

Here at Finish we mainly work on commercials. I have done a few films, though. Recently I completed a very nice, low-budget comedy movie called Powder Room for MJ Delaney, starring Sheridan Smith and Oona Chaplin.

I also completed a film with Shane Meadows a while ago, called Dead Man’s Shoes, shot on 16mm. It was lit by Danny Cohen – a brilliant DoP – who shot The King’s Speech and Les Miserables. It was all shot with natural light with the exception of one light in one scene. Shane is a lovely guy and that was a really nice job.

What projects have you enjoyed recently?

I graded a lovely pair of commercials for VO5, directed by Rob Leggatt at Knucklehead, a sweet Halifax commercial for Guy Manwaring at Sonny and a beautiful ad for Marcus Söderland at Academy.

VO5 was shot in Cuba and tells the stories of two guys - one a peasant and the other a general. Both meet a girl and change their lives for the better. The art direction, location and cast – and, of course, the grade – make for some beautifully crafted commercials. We were able to really play with the palette. Cuba looks stunning on film. We wanted to create an amazing looking pair of films, and I think we succeeded.

Halifax is about a boy called Charlie. The grade had to compliment the feel of the ad, and not overpower the images. Guy and I decided a softly, softly approach was best, making the most of the abundance of light on certain shots and giving a soft subtle look to the film.

The Marcus Söderlund project was a Kuoni commercial about a woman running underwater. It was all shot in The Maldives, and I wish I could have gone!

It was quite a challenging job, to try to capture what it is like to be underwater. It’s not an easy thing to do because of the way light behaves in water. It strips all the red spectrum of the light out – by the time you are 10 metres down it is really blue. You have to put that light component back. I had to really work to give good skin tones and get the general vibe. It was quite an involved grade.

The commercial has got a reality and an unreality to it. You are trying to create a mood in probably one of the hardest environments to shoot in. It was a lot of juggling around with things to come up with the final result.

How has your role as a colourist changed?

The biggest change is in the systems we use. Camera formats have changed; digital has taken over from film; and we are using data grading systems, which need a different approach to how you treat the images. The image quality is very different to something shot on negative.

The whole workflow has changed, too. I guess you could say that the initial change was the technology. First they were hardware-driven machines with dedicated hardware for real-time processing. When Baselight was introduced, the CPU’s had to run the whole grading system and not just focus on one tool in the system. The speed of CPU’s had to catch up with the software capability.

It was already obvious that Baselight was the future: it was how we were going to move forward. Suddenly, instead of a traditional telecine suite where you had a colour corrector and different pieces of kit made by different manufacturers communicating with one and other, you now had one coherent solution. All you needed to do was get the data into the system.

Baselight would work with any resolution. I had been used to using quite a limited system in terms of what media it could handle, i.e – 625 or HD – to a Baselight system that would cope with pretty much any resolution. It can handle 6k if need be. Or it will run multiple resolutions – you can have multiple different camera formats on the same timeline, for example.

Baselight will export whatever deliverables needed from the timeline. Resolutions are no longer an issue.

Initially, it took an adjustment period for everybody to understand how Baselight was different from telecine. We had to get our head around how to set jobs up in the system, how we managed the data workflow, and how that workflow affected the rest of the post production workflow.

Our jobs as colourists evolved too. Because of the way that digital cameras changed – and the speed at which it happened – it was inevitable that we were going to have to change our working practices to suit.

I was quite surprised at how quickly film was sidelined. I think it was the ALEXA camera that did it - it was the camera that really put the final nail in the coffin for film, certainly in commercials.

A digital camera brings an inherent difference in the quality of the image. Something shot on film has a different response to light. Film is affected by light at a molecular level, so the intrinsic characteristic of the image is different to a log C file. As colourists, we had to understand what was happening, and how we needed to change our working practices to get the best out of the base image of the new digital pictures.

People have got used to that now, and you see some amazing things. And we have a lot more tools at our fingertips: if you can think it, you can pretty much do it.

I have tried to help the Baselight development, by giving feedback to FilmLight on the tools I would like to see and the performance of the current toolset. The team there has been very responsive: they have certainly listened.

Getting that kind of support makes it a product worth using.

What is your favourite thing about Baselight?

I like lots of things about Baselight, but I like the Blackboard control surface even more. It’s a very comfortable board to use. I’ve tweaked the set-up of the keys – it’s very configurable – and it is incredibly intuitive to use. If I don’t have anything on the surface that I want, I can find it in the software and set it up.

How does Baselight improve your productivity and creativity?

The workflow through the Baselight system is very slick. The whole process has evolved over the years and is in a good place. The only bottleneck is the speed of the drives bringing in the images, and that is not going to change until we find faster storage or interface to move the image data.

But once the media is in the system it is very fast.  The whole set-up of being able to work in the background on Baselight Assist while the colourist is grading, prepping and rendering in the background, definitely makes things quicker. It means you are not tied to one room all the time. It’s possible to connect multiple Baselight systems together to share resources too. At Finish we use each other’s machines over the local network, which is very fast.

In real terms, it means that people get to go home. You don’t need to wait around all day for a room to be free to prep for the next day, or to render shots out. That was important for me when choosing Baselight for Finish. It means that the colourists and assistants get a chance to have a life outside of work.

In terms of creativity there is a pretty hefty toolset in Baselight now. You can remap the primaries if you want – that was something I specifically asked for. There are new features for blending back images through themselves quickly. It’s easy to swap things from upstream to downstream in the grading stack. There’s a lot of scope here for really controlling the image, really getting the best out of it.

As a Baselight user, it is not complicated – it’s easy to work out how to do what you need and I don’t ever run up against a brick wall.

Grading is a fluid, organic process. I could grade the same film each day for a week and it would look different each day. It’s an emotional response: you grade the way you feel. And people will respond accordingly to the look of the images, and how the look progresses the story.

That’s what I like about grading – it’s never the same job. I’ve been doing it a long time and I’m still not bored by it: in fact, I still love grading. Baselight gives you all the tools you need, but it’s up to your imagination to use them.

What do you do at the end of the day?

The short answer is that I get on my bike and ride home. I also like to scuba dive and rock climb: I tend to gravitate to being outdoors. I spend so much time sitting in the dark that I love getting out into the wild and doing something different. Also, without being too corny or pretentious, I just love being outside in all weathers and soaking up the sights. A grim wet and windy day in the park with my dog can be quite an enchanting experience. The power of nature is beautiful, if one takes the time to look.

The cinema also has a big draw for me. I’m quite critical of the look of the films, and whether it is enhancing or disconnecting my belief in the story. Art and photography are also important to me. The way great painters like Turner, Caravaggio or Monet, to name a few, use light and colour is fascinating. As a colourist, it’s essential to understand the behaviour of light in photography, and how it interacts with objects, trees, people, mountains, the ocean, peoples faces, clothing, etc. The list is endless.

Going to exhibitions and looking at photography and cinema builds my own personal image database, helping me to see where I can draw inspiration. Whether I am walking up a mountain in the Pyrenees or at a London art gallery, I draw inspiration from it all. 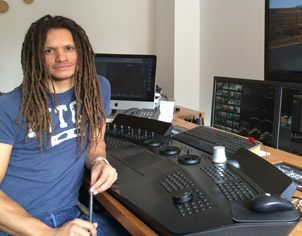 “Grading is a fluid, organic process. I could grade the same film each day for a week and it would look different each day.”