Philipp Horsch founded BFS Entertainment GmbH in 2006. The company offers file-based post production services, including 4K HDR workflows, dailies, editing, and IMF/DCP/HEVC deliveries, along with high end digital mastering for high-profile TV Shows. As senior colourist he has graded some exciting projects including two projects both shot in 4K, namely Der Bergdoktor and Die Bergretter, that have proved to be a great TV success in Germany.

I got into colour by sheer chance. I was working as Post Supervisor in a German production company and then I decided it was the right time to start my own post-production company. During our initial project, which was for the first German TV series in HD, I was faced with colour for the first time in my life. As I couldn’t find a colourist until the project’s kick off I decided to handle it myself. What can I say? It was love at first sight. Since then no day has passed for me without spending time on my passion: colour.

Can you describe your facility and everyday processes?

BFS Entertainment GmbH is a small company located in Munich that specialises in digital post-production. Our services range from editing, dailies, design of titles and post-production supervising, through to grading to finishing. Colour correction, however, is the core service of our company. Consequently, all our workflows are perfectly optimised for Baselight.

We usually consult with production teams in the early stages to pick the right camera, then throughout the project until the final master. That means we support the DPs on location, create the dailies, supervise editing and, of course, offer final mastering and colour correction.

We are currently working on four commercial mainstream series. In general, because mainstream shows can be underrated, it is sometimes pretty hard to argue your qualifications as a colourist with a new DP. Amongst other projects we handle two of the most successful German TV series, Der Bergdoktor and Die Bergretter – both shot in 4K on the RED camera.  One should not forget, those formats live off impressive pictures and creating them is very complex, as they are both shot at high altitude in the Alps. The locations bring constant difficulties when it comes to doing the grade, such as changes in the weather and frequent changes in ambient light.

To handle these projects your workflow has to be perfect as there is no time for mistakes, especially with their tight time schedules. Over the years BFS Entertainment has built a trusted relationship with producers and TV stations, which gives me a little more freedom in my position as colourist and of course, that makes it even more enjoyable.

We have ten more feature film projects lined up this year including dramas, thrillers, romances and some other interesting projects. The diversity of those projects offers a vast variety of tasks, input methods and other new challenges. That definitely protects us from getting stuck in a dangerous day-to-day routine.

Additionally, being a CEO also requires keeping an eye on sales and company productivity, which includes keeping up with research and always striving to afford state-of-the-art equipment. Thankfully the pleasure of creative work remains the core drive of our business.

Can you provide any more details about your work for television?

I mentioned Der Bergdoktor and Die Bergretter earlier, which will actually be the first German UHD HDR productions. In the last third of 2016 we have already set our focus on preparation for these series’ airing in early 2018.  We’ve finished a number of UHD trailers in HDR and also support the TV station in creating and implementing the necessary workflows to produce these shows.

Have any projects been particularly challenging?

Not long ago we also finished the first German feature film in UHD HDR titled Island Krimi for NDF, co-starring Franka Potente. That was a wonderful experience, as workflows for HDR didn't exist beforehand. It was especially important to have good support and colour management for the correction stage. Baselight is a real all-rounder. As the film is made of very different materials - HD to 6K, 25fps to 100fps, and very different colour spaces - the conforming was quite a challenge. But with Baselight involved it almost felt like a piece of cake. Thus Lars Liebold and I could focus on the creative work inside the suite.

Special thanks goes to FilmLight's support team, specifically Daniele Siragusano. Our partnership is persistent and successful and would not be the same without his engagement. A flawless implementation of new standards like UHD HDR into the existing workflow wouldn't have been possible without his support.

How would you describe your personal style of grading?

I don't think that colourists should have a personal style. Our job consists of understanding the bigger picture and the vision of the DP, and transforming it accordingly. A colourist should be capable of using all the tools and reading the DP's mind before even thinking of anything.

My job is mainly based on cooperation and teamwork, where I try to understand and to learn something from those around me. For instance, a director once told me during a grading session to use many untracked windows as they disappear when used in larger numbers. Nevertheless sometimes I like to break taboos like drawing sharp-edged windows. Sometimes I base my visual creativity on styles of old photography. In my opinion Edward J. Steichen’s The Flatiron is a wonderful inspiration for a dark picture.

Unfortunately you're not always involved from the beginning, though there are some projects where we participate from the start of the first design. This is especially important for HDR, where it’s key to talk about contrast and brightness before the project begins. The producers realise this as soon as they ask you to do something that is simple in SDR, like removing a cable from a shot by placing a shape on top of it – but you can’t get away with that as easily in HDR because of the high definition of the image.

By using Baselight every creative decision becomes real with just a snap of your fingers. There is nothing that precludes me from implementing my visions. Usually Baselight offers direct and uncomplicated support. Since we started using Baselight there hasn't been a single frame in 25,000 coloured minutes that we couldn't handle.

It has happened a couple of times that I’ve thought of improvements that I’d like to see, that very nearly the same features were introduced in the next update. For example during my last HDR correction I thought about how helpful it would be to have a separate layer for mid contrast. So I built it myself using a hue angle key. A little later when I was making suggestions to Daniele Siragusano he told me to be patient and check the next update. The new colour temp layer is pretty awesome. That's exactly the type of tool colourists are looking for every day.

Once a DP told me about a no-budget project produced in monochrome with the ALEXA with an infrared attachment. The frame grabs were pretty impressive. I would love to produce such a project in combination with the contrast level of HDR.

Just get started! There is no excuse for not just grabbing your mouse and starting to achieve your goals. If you really want to work in grading you can do it. You have still got to take one step after the other. The first step would be an internship in a post-production company and nights of practicing in a professional grading suite. I would be impressed by an employee who practiced their grading in my suite and for sure, after a while I would offer them the chance to prepare for me.

In photography and especially drawn art from the early 19th century.

What are your favourite TV series and / or films?

At the moment I'm pretty into Stranger Things, especially Tim Ives’ work with the Red Dragon camera. He already proved his talent with House of Cards too. I was also impressed by Bates Motel and its overall look. It's almost as if Hitchcock himself was at the set.

I became a father this year and my family is my perfect balance to the dark lonely suite. For some more action I enter the MMA cage to the deep concern of my family... 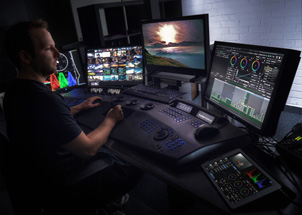 “Sometimes I base my visual creativity on styles of old photography. In my opinion Edward J. Steichen’s The Flatiron is a wonderful inspiration for a dark picture.”