Senem first started her career in 2005 as a telecine assistant. She was soon promoted to senior colourist and has worked with many influential directors from around the world. In 2011, she built up the colour grading team at Imaj, where she continues her work as DI supervisor and lead colourist. Senem has graded hundreds of commercials, music videos, feature films and documentaries during her career.

It was more luck than a ready mapped out plan, actually. After graduating in Western Languages and Literatures in 2005, I was offered a job in an assistant account manager position at 1000 Volt Post Production House, based on my English and communication skills. I was the main link between the company and the lead colourist, Dominic James Aarons, during his transition from London–based post-production company, Rushes. The first time I saw him grade, I was mesmerised by his work. I knew it would be a steep learning curve to become a colourist like him, but Dominic was a patient mentor and I was an ambitious student. I assisted him for 18 months before I started grading my own dailies. Within four years I had worked my way up to senior colourist at 1000 Volt, before heading up the grading department at IMAJ in my current role as lead colourist.

I mostly work on high profile commercials, as they are essential to the Turkish television industry. I also regularly work as a supervisor for features and sometimes grade big budget music videos as well. In two weeks, I will be grading a feature film by one of my favourite directors.

I enjoy working on many different projects; the variety allows me to be more creative, to continue to progress and develop my skills further.

I worked on Renault Clio, Magnum and Turkish Airlines commercials recently. I am also running grading tests for upcoming feature films as we have quite a few this season.

Increasingly often, we find ourselves trying to work out a balance between shortened delivery times for projects and heightened client expectations, while maintaining the high quality of our work.

Local directors and DoPs are usually able to make the time to attend the grading sessions, and my favourite type of session is when they both sit by my side and we grade the film together. It is fun to work on different looks that appeal to each one of us and agree on the best one; and sometimes discuss whether to push the envelope or keep it nice and simple.  But, if the director and/or DoP can’t make it, we meet beforehand and talk through the project in detail and may also agree the look for the film based on the rough cut.

Over the years I have built many trusted relationships with local directors and DoPs, so they are often happy for me to grade the movie independently and they review it after. After I have graded the piece I incorporate any adjustments the director would like to be made before the final edit.

I definitely think starting as an assistant to a lead colourist is a great first step and has many advantages. Not only do you get to see a project being graded right in front of you, but you also have a chance to witness the collaboration between the colourist and the client on both a technical and personal level.

Watching films and commercials regularly to stay current is also helpful, but as with any career journey: don’t give up easily and definitely have fun.

Do you use the complementary Baselight products?

We are considering using FLIP to help on-set, because we are facing a very busy feature film season next year. FLIP definitely seems to have the potential to help us to hit the ground running when the film reaches the grading suite.

The system is so powerful and user friendly that I struggle to pick just one single thing.  I absolutely love the Blackboard control panel and the auto-tracking feature never fails to amaze me.

Baselight is also a very reliable system - it never disappoints. Its power and speed are incomparable. Even simple tasks can take a lot of time on other systems, but on Baselight they are incredibly easy to perform. The Blackboard panel makes a huge difference too; both the software and the hardware are sophisticated and smooth. I miss Baselight when I work on a different system. I often find myself thinking, ‘I would do this in seconds on Baselight’. The way Baselight operates reduces a lot of unnecessary effort, enabling me to focus solely on the creative side of things. It saves a great deal of time, and clients also enjoy the reduced turnaround time and being able to see their results so quickly. Baselight definitely enables me to be more productive, and more importantly, to have fun at work!

Do you work directly with the raw data within Baselight? What are the benefits?

When digital cameras were first introduced, I didn’t like the fact that I needed a file conversion. As a telecine artist, I used to work on 35mm and 16mm and I was a huge fan of raw data. Now, though, with the benefit of the raw data in the digital world, I have the advantages that I used to have when working with film. I can balance the raw data as I like and freely choose the colour space I need to get the best grade. The fact that I don’t need to transcode, cache or render to play back in real time is a blessing.

I relax on my walk home while listening to music. Some days I enjoy going swimming too.

I would have loved to grade The Matrix because this was the first movie I saw in which I recognised and appreciated the colour grading process; especially the difference between the florescent green Matrix world and the more natural colours in the real world - a very clear and impressive distinction. Other than that, Nike’s Write the Future commercial and BBC’s Planet Earth documentaries.

I don’t think a colourist should have any one set style. After all, a chef doesn’t cook each meal they prepare in the same way. Good quality work and the colourist’s good choices will be reflected on each job, but ultimately every project requires a different style: the way the material is lit and shot - and the storyline - will lead you to the style that’s just right.

Cinematography is the main variable and colourists need to keep an open mind to new ideas.

What is your favorite colour? Why?

I struggle to choose a favourite. The one I like least is pink, though.

People who are great at their jobs yet still humble and eager to learn more.

I think I would choose the sound department as I find it quite similar to colour grading, in the sense that both serve to enhance the storytelling of a finished project. I would also love to be involved in movie scoring for a day.

If I find myself watching the grade a few more times with a smile on my face even after I am finished for the day, then that is a good day.

How has your role as a colourist changed in the past years?

With the shift in format from traditional film to digital, the grading systems have changed quite drastically.

I used to work on Pandora Pogle with Spirit 2K, which was a great tool to grade on at the time, but far too limited for today’s needs and systems. We used to have to leave parts of the job to VFX departments as we didn’t have the necessary tools for tracking and animating windows properly. We couldn’t use more than six windows at a time, which simply wasn’t enough.

Now, even compositing can be done with colour grading as well as stabilising. Final renders of feature films are delivered from Baselight, which affects the way a colourist works: the setting up of jobs, timelines and workflows are much more efficient. As a colourist I now have more creative freedom and am less limited by the system’s capabilities. I feel very lucky to have started my career working with negative and catching the telecine age and then moving on to having access to the current advanced tools.

In your opinion, what natural skills do you think lend themselves to being a successful colourist in your field and in Turkey?

To be successful, a colourist needs to combine creativity and a natural eye for colouring with a passion for what they are doing. Especially in Turkey, harmonising different ideas and making quick judgments are strongly required and clients will expect their colourists to be meticulous but fast at the same time. Turkish clients particularly appreciate good manners, aspirational humour and like to be presented with new ideas.

I have always been a fan of Friends, although that has nothing to do with the colouring of the show. I also love House of Cards and Game of Thrones and I have also read the books. 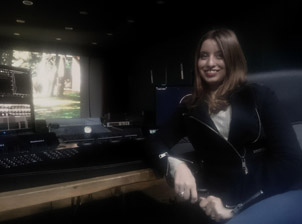 “I miss Baselight when I work on a different system. I often find myself thinking, ‘I would do this in seconds on Baselight’.”