Shane Bartley, originally from Dublin and now based in Bangkok, is a leading colourist at Technicolor and has worked on projects such as Ilo Ilo, Last Summer, Angels and 5cm. In this interview, Shane explains how he ended up working in post and what makes a good day in the office before he jumps on his motorbike and heads home to the family.

The first opportunity I got to work in the post industry came when I was about sixteen, in Dublin. I did some work experience at Screen Scene and I just loved the atmosphere. I quickly realised then that this was the industry I wanted to be in.

At secondary school I decided to follow an offer from Bangkok to work in both production and post. After four days in production shooting ducks and babies I needed to get out so decided to focus on post. I got two months work experience at Iloura postproduction and ended up staying two years!

This was completely by chance actually. In 2001 I was working at MPC in London, in the commercials VFX department. I got an offer to go to Thailand, originally to be an online editor for Soho Asia. However, when I got there they were short of colourists so they asked if I fancied colouring. It was a huge change but I have always loved a challenge and the idea of getting to create beautiful images was really appealing. So, I jumped at the chance.

The biggest hurdle at the time was the equipment and getting used to reeling up the telecine. But I loved it, and have never looked back.

The biggest buzz I get in my job is when a client comes in and sees the graded footage on the big screen for the first time. They have usually, at this point, spent a lot of time looking at the raw footage so it’s always a big moment and I love seeing their reactions.

I also really enjoy adding the subtle little tweaks that a lot of people won’t even notice, like popping the highlights on the main actor or adding shafts of light here and there, for example.

What sort of jobs do you work on?

At present I mostly work on feature films but in the past I have worked on a variety of different content, like music videos, documentaries and broadcast.

Most of my career has been spent on short form which is pretty compressed and there’s usually a fast turn around required because of tight deadlines. However, I like working on feature films because they often give me more time to play around and try new things.

I recently worked on the grade of the award-winning film Ilo Ilo, which was directed by Anthony Chen. We had two weeks to complete the grade, which is really rare, yet so refreshing. We used the first four days to go through everything and give it a first pass and then we started going through and adding all the little, subtle details. Then, we completed the final grade. It was great fun and nice to have the time to be more creative.

Well, on the funny side of things, it’s always a good day if the client decides to leave me by myself to grade [he laughs].

No, seriously, the best days are when the clients are happy, I’m happy and we have images that look great. It’s a bonus if the footage has been shot well, especially with a mixed media film because that can be challenge otherwise.

For me, the one I always think back to, mostly because it was such a large project, shot on 100 rolls of 35mm, was a project we did for Gang Films Asia while I was at Soho Asia.

The project was for Motorola mobile phones in China and the final requirement was for 15 different edits, the longest being five minutes long. The directors - Christophe Chrudimak and Moritz Friedel, also known as Les Rad-Ish - were a joy to work with and the content was all shot beautifully by the DOP, Andreas Berger.

There were quite a few locations which called for different looks, like a Mercedes limo driving through Bangkok's Chinatown at night; a fashion show runway; a private club VIP room party; and a fluorescent hallway, to mention a few. It was a challenging and engaging project and I am still proud of how it looks all these years later.

Technology plays a huge part in the way we work. As raw file formats are getting larger and larger it’s so important to be able to grade in real-time. Deadlines are getting tighter too and time is often limited so having the best tools and technology at your side is critical to be able to get the best results.

This is the great thing about Baselight, it’s real-time and easy to use and it also has a great toolset.

My first experience of using Baselight was in 2007, in Hong Kong. I just loved the way the cursors worked, the fact that you could have multiple cursors on the screen and how you could grade the foreground and background separately. It was really ahead of its time compared to a lot of the other systems on the market.

Technicolor purchased a Baselight system about a month after I arrived there, in 2012. A few other members of the team had used the system before as well, so it was an easy decision.

It’s a bit of both, to be honest. For me, most of the creativity and experimenting happens during the tests for clients, before the full grade begins. When they arrive they usually have a look in mind so we’ll try a few different looks in the tests before deciding what feels right for the film. It’s always good fun as you can try new things and new looks.

The speed of Baselight is brilliant too, which allows me to do this. It’s so fast so you don't have to shy away from trying new things – you know Baselight will be able to deliver it, quickly.

The clients love the Blackboard as well, which always helps us. They’re immediately impressed by how beautiful and ‘glowing’ it is. In fact, a lot of them still want to take photos of it – other systems just don’t compare.

The biggest challenge is matching over or under exposed shots with the rest of the footage. I also get quite a few projects with mixed formats.

Some projects like to take a professional camera, like an Alexa or RED for example, and mix in a few shots from Canon DSLR or even GoPro – these grades can be a bit of a challenge in terms of getting a seamless look across formats.

This is where Baselight's multiple cursors are really useful as they allow me to compare shots side-by-side or wipe between them, making it quick and easy to finesse the match.

Do you see any new projects originated on film today?

To be honest, no – not really. Pretty much everything I have worked on in the last year has been digital. I think the last time I worked on film was in Istanbul and that was just over a year ago.

However, we do get a lot of requests to create a film ‘look’. In fact, today I have been working on a movie which is looking for a 70s filmic look. It was shot on the Alexa so I’ve been testing different creatives and tried about six different looks so far, to see what they’re like. I really enjoy this sort of project, where you have a real specific goal. I enjoy the research side of it and trying to recreate a certain look or feel.

Not a huge amount at present. Usually where we get involved is in the testing and helping to try different looks. If the director has a certain look in mind, I might be asked to help them visualise it in the early stages, but that’s usually as far as it goes.

For example, the director on the movie I mentioned above - looking for the 70s filmic look - gave us a few examples they liked: Argo and Killing me Softly. So we were able to emulate these looks on their initial footage, to help them see what the finished results may look like.

It would be great to have a flavour of your life outside work. For instance, after spending numerous hours of the day in a darkened room, what do you enjoy doing most outside work and why?

Well, I am a very simple man really. I like to hop on my motorbike – a twenty year old Honda - and go home to spend time with the family. Or, on occasion, I may head out for a few G&T's with friends. 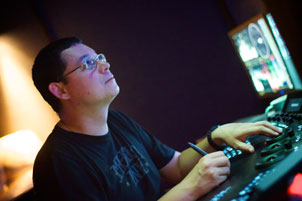 “Clients love the Blackboard. They’re immediately impressed by how beautiful and ‘glowing’ it is. In fact, a lot of them still want to take photos of it – other systems just don’t compare."