FilmLight talked to legendary cinematographer Vittorio Storaro in Los Angeles this summer. He had just completed work on Café Society with director Woody Allen. It was Allen’s first taste of digital shooting.

You’ve done 58 movies on film. What was your first experience with DI?

A long time ago, someone at Kodak asked me what I thought about digital intermediate vs. film. Because I had already started doing transfer from film to telecine, I had some experience of the process. But the quality was not there yet though: digital cameras and colour correctors were still in their ‘infancy’.

My first experience in digital finishing was on a movie called Muhammad: The Messenger of God. In 2011 and 2012 we were doing the pre-production and production of the film, which we shot in Iran. I shot on film because in my opinion no digital camera could handle such drastic changing weather conditions. One segment though was transferred digitally, mostly for VFX purposes.

For the post-production of the film in 2013, we sent all the negative material to ARRI as both Kodak and Technicolor Italy had closed. ARRI scanned the negatives in 4K 16-bit. After that we decided to do the entire DI at ScreenCraft where I could review the film in a 4K 16-bit colour screening, which is very important. It was an almost 100 percent switch from film to digital. They also had a Baselight system in their screening room that we moved into their beautiful 4K theatre so we could work in the optimal environment.

The colourist at ScreenCraft was not used to doing films, as he had mainly worked on video and TV, so I had to influence him step-by-step, feeling the story. My advice to him was to work on colour in real-time, listen to the dialogue, understand the dynamic and not just concentrate on the technical aspect of the fixed images.

In cinematography the first image doesn’t have to be perfect, it just has to be the starting point. And it is moving in time until you reach the end. So when you see an image through Baselight, you have to think about what you really want to achieve. This is somehow a visual journey, which follows the path of the world where the characters interact, or the music plays.

It is fantastic to have colour correction in real time. Baselight through the 4K 16-bit video projector gave me my first taste of this great opportunity.

How did you come to shoot and finish Café Society digitally?

When Woody Allen asked me to do Café Society, he had never done a digital capture before. At that time I knew that it was a chance to step up to this new digital world. I chose the Sony F65 camera so that the image we had on set was as close to the final image as possible. I had experienced the first CineAlta digital video cameras from Sony in the past and valued the quality of the Sony equipment; I know that what I see on set is 90 percent of exactly what I will see in finishing. Plus I wanted to work with a camera that gave me a ratio close to the 2:1 aspect ratio that was suggested to me by Leonardo Da Vinci’s painting, along with 4K resolutions.

We also had a 4K 16-bit video projector, because that was my previous experience and my preference. And for the post-production of the movie at Technicolor PostWorks NY, I asked specifically for the colour grading to be done on Baselight.  It was good news, as they already had the system!

This is when Anthony Raffaele joined your colour journey?

Anthony Raffaele was originally only supposed to be the colourist for the DI, but with Technicolor, we decided to have him on board from start to finish.  In Italy we are used to having a technician next to us from the beginning to the end of the project. To me, if the colour process moved from one person to another from dailies, to post, to DI, you risk wasting all the history, the knowledge and the experience that has been built and in my opinion it’s the best experience that I’ve had.

What is the look of the film and its journey?

In my mind the movie is in four different parts: the Bronx in 1935; then Hollywood as the second part; followed by when the main character comes back to NY; then in LA. In essence it is four different looks, but keeping an overall style. I wanted to see the subtle differences in the dailies. I’d get the dailies on Blu-ray copies for me to watch on a calibrated Sony monitor so it was very, very close to what I had on set, the same thing as Woody Allen.

Anthony often came to Los Angeles during shooting, and when I was in New York we’d watch the dailies together. Looks were saved to SD cards as LUTs, with notes. Every day Anthony was going through all the shots and applying the LUT that he already had, then he would make adjustments according to my notes.
We practically grew up together through the entire film. And when we arrived to do the DI we had the right experience to continue.

For finishing, we graded using ACES with Baselight converting to XYZ. We got the EDL from editorial, pulled all the RAW media files from the LTO, and conformed in Baselight.  I told Anthony to always compare source material with the edited version. Check meticulously for any difference and get the feeling of our original intent. It is very easy to get lost in DI.

It is also very important to me to watch the film with sound, even if it’s temporary sound. The dialogue between two characters can give you some kind of feeling, which impacts the light, for instance; or the time they have spent talking, everything is always moving.  Or the music. If you don’t take notice of the words and sound you cannot adjust the colour accordingly. Having said that, Woody also asked to watch the corrected copy without sound.

How much time did you spend on the DI overall?

It depends on the movie of course but I usually personally get involved in the DI of the movie over a week. Some movies require more time. It also depends on the relationship you have with the colourist. I don’t know how much time Anthony spent in the dark room polishing the movie without me. He is a perfectionist and because I was always pushing our creative intent, he probably spent time seeing what features within Baselight could do more. I’ve always encouraged him to perfect his art and technical knowledge. I’d say, “Can we try this? Can I look at that? What if we try it? Tell me, show me.”

You talked about the evolution from film to digital to DI. How would you say the role of a cinematographer has changed in this time?

The main change is that before digital nobody was able to tell how the film would ultimately look. Only the cinematographer – through perception, knowledge, culture, intelligence, technology and experience – would eventually predict how the image would end up looking. Today, with digital capture and high-end technology, the standards are higher and reachable and pretty much everyone can tell if it’s good or ugly, too contrasted, too bright, and so on. Digital video cameras have mostly everything automatic, you don’t even have to think anymore.

Knowing only technology is not enough. You need to know the meaning of the visual elements as well. Know ALL the arts that are part of cinematography. Cinema is a common art, not a single one. A good cinematographer will bring feeling and composition from the storyline, adding the emotion, the feeling and his own perception to the film: to know how one colour connects to another colour and the kind of emotional reaction you can have in relation to them.

What about the colourist’s role nowadays?

Firstly, I would say that a colourist has to know everything about production on set so that he or she can cover the journey of the project. Anthony told me, “I learnt so much working with you, Vittorio, because I’m not used to being asked the things you ask me, and no one explained why to me.” I was always referencing paintings, always showing him pictures and explaining why the artist had chosen this particular content or softness for instance.

Secondly, to reach that level where you can transfer a completely abstract idea into images, materialise concepts, the colourist has to know and control the grading system he is using as well as the tools sitting in his colour suite.

I had such an experience when I was at Technicolor in Rome. A colour supervisor I was working with, Ernesto Novelli, had an incredible sensitivity to images. If I asked him to do something, he might suggest adding four red, which I thought was crazy, but he would do so and the image was there, it was superb. He was able to use the technology to achieve the look of the image I wanted. Without such talent the technology doesn’t mean much.

On Café Society we worked effectively because Anthony knew Baselight very well. If I could give any advice to colourists – and they never listen deeply to me – I would say they have to really know their console, to reach the true potential capabilities of the machine. Learn, keep learning and never stop. 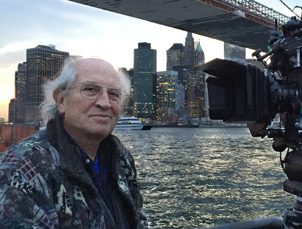 “In cinematography the first image doesn’t have to be perfect, it just has to be the starting point.”