From Storyline Studios: Grading across borders

Due to the travel restrictions of the last few years, Storyline Studios found itself facilitating several remote grading sessions where the director was in one country, the photographer in another and the colourist in the third. As a facility, it prides itself on being right at the cutting edge to make this workflow as seamless as possible.

“The technology was already there,” said Torulf Henriksen, CTO of Storyline Studios. “But the pandemic really sped up the various ways we utilised it.”

The company FilmLight, which manufactures the Baselight grading system, already developed remote grading capability between their solutions a few years ago. This means that all grades that are created on Baselight are stored in a database that can be accessed from any Baselight system in the world, Daylight or Baselight for Avid etc…

Originally, this was to enable several pieces of kit within one production house to speak with each other, and this is how it was used both at Filmmore in Amsterdam, and at Storyline prior to the pandemic. But as it is a straight-forward internet protocol, it wasn’t particularly difficult to extend it across national borders.

For the creators of Sihja, the Rebel Fairy, a remote grading session between no less than three countries proved necessary to get the film finished on time. The family feature is a joint production between Tuffi Films in Finland, Windmill Film in Holland, and Den siste skilling in Norway. During the session director Marja Pyykkö and producers Venla Hellstedt and Elli Toivoniemi were in Helsinki at Post Control. DOP Remko Schnorr and co-producer Annemied van der Hell were in Amsterdam at Filmmore, and senior colourist Christian Wieberg-Nilsen was with producer Kristine M. L. Knudsen at Storyline.

“There are really obvious benefits,” said Wieberg-Nilsen. “It’s so great that we are actually able to do it, and thus keep to the time schedule of the production. Also, not having to travel saves time and stress, and on a bigger scale, benefits the environment.”

For whatever reason, pandemic or not, if your co-workers across the world are not able to meet in person, there is now an alternative – to meet up in cyberspace and grade that film remotely.” 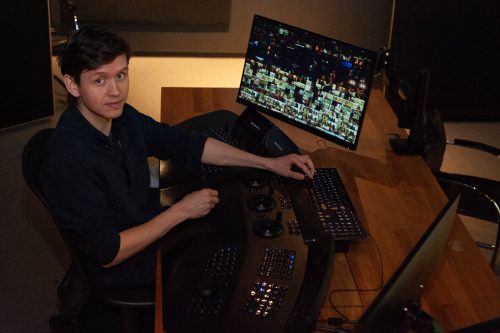 Remote grading sessions carried out at Storyline so far are: