The movie is a contemporary retelling of the story of a djinn (genie) and renowned cinematographer, John Seale, came out of retirement to shoot the VFX-heavy movie with Miller.

“The Baselight system, used by Eric Whipp at Alter Ego, was a defining factor in attaining the visual mood that the Director George Miller had envisaged for his film,” comments Seale. 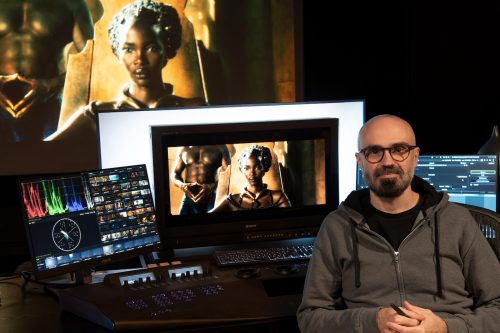 The process began with set looks off QuickTimes, set in ACES and translated to the full res EXR sequences. The editing took place in Sydney, Australia, while Whipp worked on the grading in Toronto, Canada. The team sent Baselight scenes back and forth from Sydney to Toronto, so that at any time a scene could be opened on the Baselight 2 system in Sydney, and vice versa.

“We moved high-res images across servers and when it came to live sessions, we streamed 4k images to Sydney for George and John in less than three seconds with almost no perceptual compression,” explains Whipp. “Early on in the process the plan was for me to fly to Sydney to sit with George in person, but this was all happening in the middle of COVID and the lockdowns were becoming an issue. So, we looked into different streaming technologies and found a great result.”

Every shot of the film presented a unique challenge either in relation to colour specifically or due to heavy VFX requirements and the team turned to Baselight to help achieve their vision.

“There was a huge amount of VFX work in the suite. We created vapour coming off the djinn, sky replacements, “Djinn vision” FX, and very complicated transitions,” comments Whipp. “Due to the way Baselight is architectured, it was possible to do this all in the suite without the need to have VFX involved. This was a bit of a life saver because we were able to keep the grades of the incoming and outgoing shots “live” rather than bake them down and supply to VFX,” Whipp adds.

“The Baselight grading system was an incredible asset to finessing the images”, agrees cinematographer, John Seale. “The visually complex film in flashbacks was aided in the shooting by knowing that grad filtering, vignettes and sun shafts could all be done in post. This was a great saving in time, comfort, and speed of shooting.”

The colour team worked closely with the VFX department to achieve the desired outcome. VFX Supervisor, Paul Butterworth, joined the first several colour sessions, so they could collaborate on how best to achieve their goal.

“One thing that did play in my head the whole time,” Whipp adds, “was that this was essentially John Seale’s last film. He had decided to officially retire afterwards, so I really wanted to do him justice and make sure people walked away from this film thinking “the visuals were stunning and beautiful”. I hope we achieved that.”

Three Thousand Years of Longing was released in theatres globally in August and September 2022.