Warner Bros. relies on Baselight for dailies and DI, creating a characteristic period feel for musical

Adapted from the stage hit, Jersey Boys is the musical story of Frankie Valli and The Four Seasons. For his movie adaptation, director Clint Eastwood wanted a characteristic 1960s feel. He turned to the Warner Bros MPI team and their colourist Maxine Gervais on the Baselight colour suite from FilmLight.

Shot in 2K anamorphic using an ARRI ALEXA, Gervais worked on Baselight with cinematographer Tom Stern to create initial looks. This meant the dailies had some of the character that Eastwood was looking to achieve before they even got to editorial. These looks formed the basis of the finished digital intermediate. 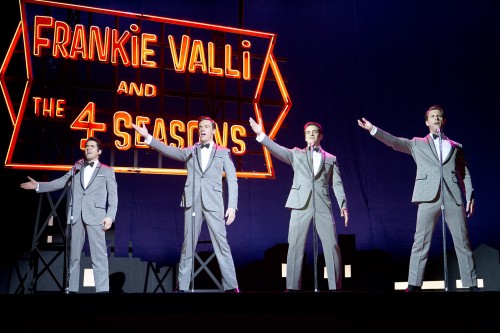 “I first met with Tom early on in the Jersey Boys project, prior to shooting,” explained Gervais. “ Tom and I discussed doing dailies on Baselight, as they’d never done it before. We established looks that we converted into LUTs to plug into Baselight, so when we started getting the material all I had to do was grab the right look and balance things out.”

“Clint wanted to create a strong, de-saturated style with a very periodic feel to it. He really wanted to portray the sixties, so we let certain colours breathe – mostly elements of the wardrobe and details like the girls’ lipstick,” recalled Gervais. “I would de-saturate the overall picture then grasp and pull through certain colours, making it look very similar to television in the sixties.”

“It was an intricate look,” she added. “When you go very de-saturated, it always requires a little more balancing. Tom is a wonderful DP who shoots fast, knows what he wants but always got time to light it well. With Tom’s support, knowledge and understanding of how Clint works, coupled with the power of Baselight, I really felt I could do anything with the look. We ran a first pass by Clint who just had a couple of notes and then we just went from there and let our creative minds do the work. It really was a great team and a smooth DI process. For me it is an honour to work with such iconic filmmakers.”

Eastwood and Stern have already moved on to their next project, American Sniper, which they are grading in Maxine Gervais’s Baselight suite at Warner Bros. They will be using the same Baselight workflow but also introducing CDL for visual effects.

“Grading is moving away from one heroic session at the end of the pipeline towards a cumulative and collaborative process,” said Wolfgang Lempp, co-founder of FilmLight. “Today grading is a continuous process from set to deliverables, with colourists working alongside directors, cinematographers, editors and effects artists, rather than in sequence with them. That’s why we offer ‘Baselight at every stage’ – not just in the grading suite, but on set, in VFX and in editorial as well.”